Beyond the Whimsy, After the Darkness

I’m writing this three days into the blog tour in support of Darkness with a Chance of Whimsy with four more days to go. I’ve enjoyed the reviews posted so far as well as the feedback I’ve received since the book came out in June. At the time I released it, I posted a story by story overview on my own blog, detailing my experiences as I wrote each piece.

My opportunity here is to discuss the experience of having a collection out and how reader and blogger feedback differs from feedback about a novel or other single works. I think the biggest surprise for me is how I regard each story on its own merits, as ten doors that I open and close on each story and compartmentalize each experience. The reason for this is that this is how I approached them as an author. I dealt with each story, finished it, published it (when I could) and moved on. Readers, more often than not, approach the collection as a single work, and comments reflect on the  collection as a whole. In hindsight, this makes perfect sense. I admit, not each story works equally well, but then again, that’s true of any collection I’ve read. And that’s okay.
I’m also equally struck by the range of feedback each story received. I’ve “lived with” The Assurance Salesman, the story which opens the collection, for longer than the ten years since it was published, and concluded my work on Robot Vampire (the last tale) for more than the two years ago since it appeared. As such, I have my own ranking of favorites, those that fit in the middle, and those that I still see as problematic. Of course, I don’t share which is which, since I don’t believe in committing public relations suicide.

But readers and bloggers have their own rankings and opinions, very different from mine. And they have strong reasons for why and how they rank them. They also have the advantage over me, in that, in many cases, they read the whole set in a few hours or a few days and can judge each story strictly on the impression made at pretty much the same time and the same emotional state.

I’ve experienced this to a lesser extent with my novels. Once it’s published, it’s no longer “mine” anymore (If only George Lucas realized that, but nevermind). Readers come away with a variety of impressions about what I hoped to do with Haunting Obsession, or what the ghost represents in Haunting Blue, or why the shift in tone in Virtual Blue. The majority of it is kind, some less kind, but I know these responses are neither wrong nor right.
But before, those readers were responding to one piece. With a collection… in this case, that’s ten chances for readers to come in agreeing or disagreeing with me. It’s been a surprise and a joy to see the various feedback and have the lesson re-enforced that these stories are not mine anymore.

I’m reminded of an anecdote told by Isaac Asimov in one of his many introductions in which he attended a dinner party and happened to be seated by a guest who was a literature professor. The guest of his own volition turned the conversation to “Nightfall”, one of Asimov’s most famous stories, apparently unaware that the author was seated by him. He went into some detail about the symbolism and higher meaning of the text, all of which, Asimov thought, he got entirely wrong. Unable to keep incognito any longer, Asimov spoke up, saying “You’re wrong about the story.” The guest asked, “How do you know?” “Because I am the author of the tale you’re speaking of.” The dinner guest, unruffled, simply replied, “What does that matter?”

The dinner guest was right. “Nightfall” ceased to be Asimov’s when he published it over 60 years ago. His personal interpretation is simply one of many, and it’s neither more right nor more wrong than any other.

For those who may have been persuaded to check out my collection because of the various reviews, essays and promotion, I thank you. Whatever you think of each story, I am learning to be less concerned with how your opinion ranks with mine but hope that overall you enjoyed it. And I encourage you to make your feelings known in an Amazon review, as it really does make a difference. More of a difference than what I think. After all, it’s yours now, not mine.

Thanks to Armand Rosamilia for hosting the closing blog on this tour and giving me this opportunity to address you all a final time. Thanks to all the bloggers who participated, and Stephen Zimmer of Seventh Star Press for his support here and in all the ways he brings it for his authors. If you missed any portions of the tour, you can find my live links to each post here at: 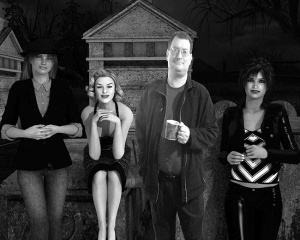 About the author: R.J. Sullivan’s novel Haunting Blue is an edgy paranormal thriller and the first book of the adventures of punk girl Fiona “Blue” Shaefer and her boyfriend Chip Farren. Seventh Star Press also released Haunting Obsession, a Rebecca Burton Novella, and Virtual Blue, the second part of Fiona’s tale. The short stories in this collection have been featured in such acclaimed anthologies as Dark Faith Invocations by Apex Books and Vampires Don’t Sparkle. His next book due out very soon will be Commanding the Red Lotus, which collects the series of science fiction novelettes in the tradition of Andre Norton and Gene Roddenberry.

R.J. resides with his family in Heartland Crossing, Indiana. He drinks regularly from a Little Mermaid coffee mug and is man enough to admit it. http://www.rjsullivanfiction.com

Book Synopsis for Darkness With a Chance of Whimsy:  Collected for the first time since their initial publications, Darkness with a Chance of Whimsy presents ten tales from the imagination of R.J. Sullivan. Thrills and chills await you, but you may also get blindsided by the absurd. This volume includes a pair of stories featuring Rebecca Burton, the mysterious investigator of R.J.’s acclaimed paranormal thriller series. Among the ten stories, you’ll find:

“The Assurance Salesman” shows five strangers more about themselves than they ever guessed.

You don’t want to venture into Daddy’s basement in “Fade.”

Rebecca Burton tries to talk someone out of a bad idea in “Backstage Pass.”

A bullied police detective finally defeats his rival in “Able-Bodied.”

A desperate father finds the “Inner Strength” to save his young daughter, “Becky” Burton.

A child seeds his aquarium with a most unusual “Starter Kit.”

Amazon Links for Darkness With a Chance of Whimsy