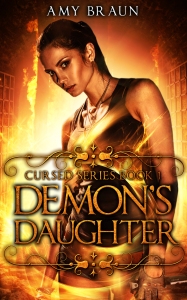 Why You Shouldn’t Stress About Reviews

I’m one of those readers who loves a good series. Nine times out of ten, the second book in a new series is even more incredible than the first one. And the one after that, and the one after that, until the final book leads to an explosive conclusion that leaves you satisfied, though you may be grudgingly accepting that your favorite series is coming to an end.

It took me years to finally release the first book in my first trilogy: Demon’s Daughter. I put everything I had into it. Gave the story my all. I was proud of it. And of course, I was nervous as hell when it was released.

I mean, just because I think it’s good, doesn’t mean that it is. Would other readers like it? Would it help build my fan base? Or would it crash and burn?

Thankfully, almost every review Demon’s Daughter has gotten so far has been overwhelmingly positive. I’ve spent a lot of time reading author blogs and guest posts saying that you can’t please everyone, and I’ve accepted that. I’m sure that one of these days I’ll get a crushingly negative review that will be like a punch in the gut and make me question every little thing I do, but reviews are subjective.

General reader opinion however? Not so much.

I don’t have a large fan base. Barely a handful that I can claim in confidence. But as it steadily grows, I understand that their opinions matter to me. They’re the ones who are going to talk to their friends and other readers about my books and recommend them. They’re the ones who are going to help my career continue. I don’t want to let them down, and with the sequel to coming Demon’s Daughter in December 2016, I’m nervous about what they think.

Do I think the sequel is good? Absolutely. But do I know their minds intimately enough to know exactly what they’re looking for and wanting? Of course not. And the truth is, I can’t. Either they’ll like the sequel, or they don’t. Obviously, I’m going to work myself to the bone to impress them, but in the end, I’m going to try not to stress too much about it.

Because I have two other books series I’m working on to stress about.

I’m not a writer who wants to stick to a certain book for forever. I have too many ideas I want to try and expand on, movies in my head that I want to put on paper. Some will appeal to my slowly growing fan base, some won’t. I’m not in control of that. All I know is that I have a story I want to write and share with other avid readers. I want them to feel the same excitement I feel when they get to the next page. I want to help them escape reality for a little bit and get lost in a world of deadly magic and dangerous fun.

Which is why, when my anxiety kicks in, I can take a step back, breathe, and tell myself that it will be okay. I’m taking a risk, and it’s part of the writing business. Could I fail? Definitely. Could I also continue to have growing success? Most definitely.

I’d be a liar if I said I didn’t love the little ego and confidence boosters that come with good reviews and readers asking for more. But what I really, truly, deeply love is writing. For me, it’s a drug with a never-ending high. Regardless of what others think, I’m going to put my story out there. I’ll take those risks and be proud that I gave it a shot, no matter what anyone else tells me.

Because I could spend my time fretting about what other people think, or I could focus on the story in front of me and give it my all.

I think it’s obvious which the better option is.

Amy is a Canadian urban fantasy and horror author. Her work revolves around monsters, magic, mythology, and mayhem. She started writing in her early teens, and never stopped. She loves building unique worlds filled with fun characters and intense action. She has been featured on various author blogs and publishing websites, is an active member of the Writing GIAM community, participates in NaNoWriMo, and is the recipient of April Moon Books Editor Award for “author voice, world-building and general bad-assery.” When she isn’t writing, she’s reading, watching movies, taking photos, gaming, and struggling with chocoholism and ice cream addiction.

Amy’s current work includes various short stories such as Hotel Hell, Call From The Grave, the full length novels Cursed: Demon’s Daughter and Path of the Horseman, and the novella Needfire. She has short stories in various anthologies such as Survivalism in The Dead Walk: Volume 2, Dismantle in The Steam Chronicles, Lost Sky in Avast, Ye Airships!, Secret Suicide in That Hoodoo, Voodoo, That You Do, Bring Back The Hound in Stomping Grounds, Charlatan Charade in Lost in the Witching Hour, and her award winning short Dark Intentions And Blood in AMOK! Amy can be found online through her frequently updated blog, Literary Braun (literarybraun.blogspot.ca), as well as on Twitter (@amybraunauthor) and Facebook (facebook.com/amybraunauthor).