How long can a monster stay hidden in plain sight?
Seventeen year-old Hope Nicholas has spent her entire life on the run. But no one is chasing her. In fact, no one even knows she exists. With her mom, she’s traveled from town to town and school to school, barely staying long enough to meet anyone, let alone make friends. And she’ll have to keep it that way.
It’s safer.
When her mother is brutally ripped away from her, Hope’s life shatters. Is this the fulfillment of Apollo’s curse? Is Hope being hunted by the shadow monsters of the Underworld? Orphaned and alone, Hope flees again, but this time there’s no one to teach her who to trust—or how to love.
Set in a universe where mythology is alive and well in the modern world, Curse of the Sphinx irresistibly blends action, suspense and romance. Curse of the Sphinx is the first book in the young-adult Sphinx saga.

Hope looked up from the bouquets to see the shadows at the back of the stall shift. A short man dressed in black advanced, his step both graceful and predatory.
This was not the same man she had seen by the Fish Market earlier, and yet his movements were eerily similar, as were his pale skin and dark eyes.
Her heart rate doubled, and instinctively, she stepped back. Her conversation with Priska came crashing back to her. She knew what this was.
“Leto! Hope!” Priska’s petite figure pushed through the crowd toward them. Time seemed to slow.
Leto took the change from the vendor and turned toward her best friend, her expression morphing from excitement to terror. The paper-wrapped bouquet slipped to the ground.
Hope’s eyes shifted from her mother to her aunt, and her muscles tensed even as her vision tunneled. Out of the corner of her eye, the dark figure was coming straight for them. She suppressed the cry that bubbled up her throat.
Priska crashed into them, grabbing at both of them with shaky limbs. Her head jerked side to side, her eyes bulging. “Holy Hades! WHAT IN THE NAME OF ALL THE GODS ARE YOU DOING HERE?”

“A fast-paced read with myth and reality seamlessly woven together to create  a story that will appeal to fans of Percy Jackson. I can’t wait to see what’s next for Hope!” 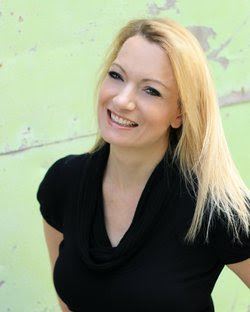 Raye Wagner grew up in the suburbs of Seattle, the second of eight children, and learned to escape chaos through the pages of fiction. As a youth, she read the likes of David Eddings, Leon Uris, and Jane Austen. Inspired by a fictional character, Raye pursued a career in nursing, and thought to help the world one patient at a time.
One summer afternoon, a plot dropped into her head, and she started writing.
Raye enjoys baking, Tae Kwon Do, puzzles, and the sound of waves lapping at the sand. She lives with her husband and three children in Middle Tennessee.
Origin of the Sphinx is her first publication, and the beginning of the Sphinx series.

Origin of the Sphinx
Amazon: http://amzn.to/1Nkzfxr