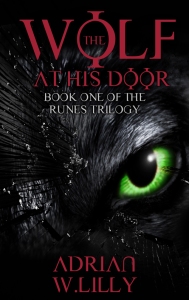 Adrian W. Lilly’s The Wolf at War is the final book in The Runes Trilogy, a werewolf series that begins with a single family’s struggle against werewolves and ends with a worldwide werewolf takeover.

“The series is a werewolf odyssey,” Lilly explained. “It’s far from a typical coming of age story, but it is about personal discovery.”

From the outset of the series, werewolves, in human and beast form, are plotting against humanity. The intricacies of the plot ever-evolve as the story unfolds across the three books.

The first book in the series, The Wolf at His Door, brings together young love—even as the lovebirds discover they have dark ties to werewolves. Simultaneously, two detectives work different cases: a number of missing person’s cases and two gruesome murders. As the book progresses, the detectives determine that the cases may be related. One reviewer said the book builds to “an absolutely epic ending.”

The Wolf in His Arms opens 10 months after the end of The Wolf at His Door. Alec, Jared and Lucy work to uncover the werewolf plot against humanity. The tension builds as they travel across the country trying to find members of The Pack.

Ilene, Alec’s mother, is battling depression after the losses she suffered at the hands of the werewolves. She unwittingly stumbles upon an 80-year-old mystery and finds herself at battle with the werewolves once again. Her husband, Jason, feels isolated from the family that is keeping secrets from him. So he begins his own investigation.

The main action takes place in and around Detroit. Ilene and Jason Rune, Alec and Lucy’s parents, have moved into a downtown loft. Locales around Detroit, including Campus Martius, factor into the action. The main characters traverse the Midwest, however, visiting a small Iowa town, and Boystown Chicago, where a pivotal scene takes place on Halsted St.

“The Midwest is the perfect setting for a horror novel,” explained Lilly. “It offers major cities, small towns and countryside—all within a day’s drive.”

As the werewolves come closer to realizing their plan, the family is not the only ones in the path of destruction. Millions of lives hang in the balance, inspiring a reviewer to say this book “is like Adrian Lilly’s The Empire Strikes Back. The action comes fast and furious, the characters are virtually divided and conquered, and the situation is dire…”

Book Three opens on the same night as Book Two ends. Much of the third book is dystopian world ruled by werewolves, where humans are subjugated. The main characters are now resistance fighters, trying to find a way to stop the seemingly unbeatable army of werewolves.

An excerpt from Book One: The Wolf at His Door can be read here.

The books can be purchased at: 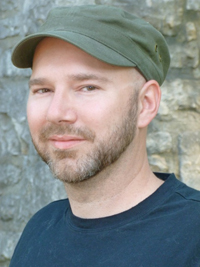 Adrian W. Lilly is the author of the novels The Devil You Know, Red Haze, and The Runes Trilogy: The Wolf at His Door, The Wolf in His Arms, and The Wolf at War. His short fiction and poetry have been published in Hello Horror, 69 Flavors of Paranoia, Nervehouse and The Weekly among other publications. He can be found online at http://www.adrianlilly.com

He is a fan of Gothic suspense movies and novels, which greatly influence his writing. Adrian’s writing focuses on strong character development and the nuances of fear that build toward horror. The mansion in his first novel, The Devil You Know, was inspired by the grand mansions in the Victorian neighborhood where he lives.

Adrian writes novels, short stories, and poetry and has spent many years as a copywriter in the advertising industry. In addition, Adrian has directed two short films and co-directed a feature-length sci-fi comedy.