The Kailmeyra Chronicles: Book Three—
Following
Nora and Gavin’s defeat of the Dokkalfar, the kingdom has flourished and
brought hope to its people.
But
looks can be deceiving.
Like
wisps of death, darker emotions seep into unexpected places. Now the nighttime
holds fresh horrors for Gavin as Nora’s visions of the future invade her
dreams. Though Nora can’t remember them, she knows Gavin sees her mind as
clearly as his own. Noticing the affects her nightmares have on him, Nora warns
Gavin of the dire consequences of altering fate. But she fears he’ll do
whatever it takes to assure her visions don’t come true—even going against all
he believes.

Rena
entered the chamber, followed closely by Tark and Weylin. Her clipped stride
and scowl made it clear that she wasn’t in the mood for fun and games. Tark
started to catch up to her, but her hand flew up, and he stopped in his tracks.
Rumpled, tired, and more than a little grumpy, she flopped down next to me and
took a long drink from her goblet, setting it down with a thump.
“Having a
good day?” I smiled.
She
raised a graceful eyebrow. “Not really.”
“What’s
wrong?”
Rena’s
eyes stayed fixed on the group across the way. “That’s the last time I help
with the recruits.”
“Why?”
Her
normally lilting voice sounded low, aggressive. “Tark suggested we put the new
warriors through their paces by using our little gifts.”
“Oh?” The
smile slid from my face. Rena was the Keeper of the Field. She could take on an
army of Dokkalfar. Surely a few student warriors weren’t a problem.
“What I
mean to say,” she corrected as we she watched Tark glance our way, “is with my
little gift. It seems I was the warm up act before tonight’s main event.”
I patted
her arm. “What happened?”
Rena’s
scowl darkened. Gavin, Tark, Weylin, and Micah glanced up from their
conversation, pointedly staring in our direction.
“At
first, all was well. The terrain responded to my call, and I had the young ones
easily contained with vine and loam.”  She jerked her head toward the only
warrior slightly taller than Gavin.  “And then he showed up.”
I
grimaced. “Weylin.”
He must
have heard his name because he looked over. His turquoise eyes, such a contrast
to his olive skin and dark hair, narrowed. He tipped his head as if to say
hello.
We both
ignored him.
Weylin was
one of Gavin’s oldest friends as well as the leader of the lower guard. He also
happened to be the only one that could pinpoint my weaknesses. Off the field,
Weylin was like a brother—sometimes annoying, other times protective and
sweet.  On the field, he was a merciless brute.
“Yes,
Weylin,” Rena hissed. “It seems his practice with you has given him insight to
exploit my weaknesses, too. And apparently your mate,” she threw an accusatory
glare Gavin’s way, “has given him permission to test not only you but all the
Keepers as well.”
“So what
did you do?”
“What do
you think?” she grumbled. “I lost my concentration, the young warriors charged,
and I was overrun.”
I
frowned. “Having your defenses stripped away stinks, doesn’t it?”
Weylin
had taunted me yesterday until I lost my concentration, and Gavin actually had
to defend me until I found my focus again.
“My lady,
your ability to understate situations is, at times, staggering.”

Elizabeth is an author, teacher, and publishing
professional who began her career as a national presenter for Resource
Profiles, where she developed teacher seminars designed to foster creative
brain stimulation. Moving into formal education, she helped at-risk students
improve their writing skills as well as created and implemented a creative
writing/blogging program that centered on teaching the 21st century learner.
Works stemming from this initiative were published online and seen in over 40
countries.Elizabeth receives invitations to speak nationwide at schools and book clubs
about Young Adult (YA) content and writing. She co-founded the popular book
blog, Chirenjenzie, which reaches thousands of people around the world. The
writer support and reader interest group promotes and interacts with followers
on Goodreads, Facebook, Twitter, and various other blog sites. Elizabeth has a
Master’s degree from Austin Peay State University, where she was trained in
classical opera. She graduated Magna Cum Laude and was a member of the Phi Beta
Kappa Honor Society.

“The Light of Asteria” received Honorable Mention at the New York
Book Festival. 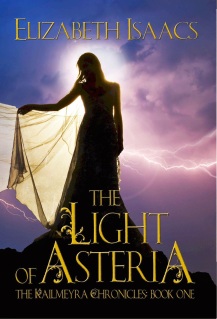