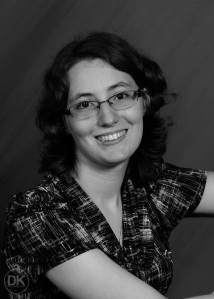 My cousin Amy McCorkle was already a guest at Imaginarium. She had been coaching me on writing and publishing my first novel for about three months at that point.  It was around February, if I remember correctly, that she suggested the idea of launching with her at an upcoming convention called Imaginarium.  I contacted Stephen Zimmer and asked if he would allow me to launch my debut novel at Imaginarium with Amy, and he said yes. I’ve been excitedly preparing for the event ever since.

Gears of Golgotha is a sci-fi/dystopian novel. 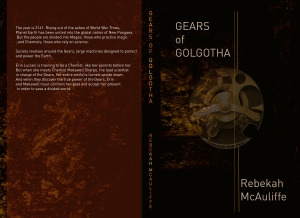 A thousand years after World War III, Earth is united into the global nation of New Pangaea. Society is separated into Chemists, those who are skilled in science, and Mages, those who practice magic. The work of New Pangaea revolves around the Gears, large machines that orbit Earth, powering and protecting the planet.

Erin Luciani is training to become a Chemist, like her family before her. But when she meets Dr. Makswell Sharpe, the Chemist in charge of the Gears, her entire life is turned upside down. And from there spawns an adventure full of intrigue, conspiracy, unrequited love, and much more.

I say Gears of Golgotha is sci-fi/dystopia because while the novel does take place in a bleak future, there is also a unique focus on the technology of the time, and how it impacts the way society functions. Think the government of 1984, the culture of Brave New World, and the divisive climate of Divergent.

Gears of Golgotha hasn’t been released yet, but it will be launching/debuting on September 20 at Imaginarium.

Rebekah McAuliffe has had a love for writing since she was very young, but her novel Gears of Golgotha is her first dive into the world of published literature. She is a sophomore Elementary Education major at Morehead State University, and divides her time between school and writing. When not writing, she enjoys drinking coffee, spending time with friends, and cuddling with her cats. Her official blog, Ravings of a Coffee-Crazed Writer, can be found at www.coffee-crazed-writer.blogspot.com. She is also on Twitter (@bekahlovesmusic) and has a Facebook page for Gears of Golgotha (www.facebook.com/gearsofgolgotha) 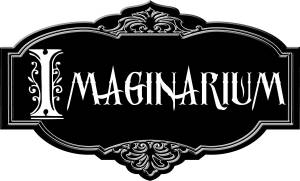