10 Pieces of Advice for Writers from David Blalock

Every time I’m asked to give advice, I wonder why. No two writers are the same. It would be a terribly boring world if they were. No two writers see the same color the same way. They don’t hear the same sound the same way. We are all individuals, separate inside ourselves from one another. Each of us is, in effect, a universe to oneself. I can only share what has worked for me. Whether that would be useful to another is questionable. Whether it would guarantee success is doubtful. What advice I give probably won’t be much different than anything any other writer has given. Nevertheless, for what it’s worth:

Rule 1. Write for yourself first. There is only one person you know who will write exactly what you want. You. You will be the only one to put words in the right order, to find the precise word to use, to tell the story properly. Before you think about publishing, write your best story or article. Then take that piece of writing, show it to no one and file it away for a year. After a year has passed, take it out and look at it with an eye to editing. If you find you’ve edited more than 20% of the work, you can say you’ve improved as a writer. Then, and only then, should you consider publishing.

Rule 2. If you cannot accept criticism, don’t be a writer. Not everyone will like what you write. In fact, more than likely only a few people will ever truly enjoy it. Readers want to be entertained but what fascinates one person repels another. Mediocre to bad reviews are more likely to contain truth about your writing than the raves. Critics are the bane of the weak writer, the nemesis of the good writer, the necessity for a great writer.

Rule 3. Write what you know. If you don’t know about your subject, you will be exposed. There is no doubt of that. Remember that your writing will not only appear during your lifetime but will likely continue far beyond your days whether you are well known or not. If you’re not concerned about that then perhaps you don’t appreciate what a writer should be. Think about the writers of the past century and how their work has or has not stood the test of time. Many of them never considered the possibility their writings would outlive them. Those who did became recognized masters of their craft.

Rule 4. It cannot be stressed highly enough to finish what you start. You cannot publish what you do not finish. This is, above all, the most important piece of advice I can give because it is the one piece I can be sure applies equally to all writers.

Rule 5. Never stop researching. Good writers are familiar with their markets and subjects. Great writers know them well. To assume you know enough about your subject you don’t need to look into it any further is a sign you are falling behind. Once you’ve fallen behind, editors will start passing on your work. There’s simply too much competition out there to think you’ve arrived.

Rule 6. There is no rule 6. If that went over your head, you’ve lived a sheltered life.

Rule 7. Don’t insult your readers by giving them anything less than your best. If you do, you won’t survive long as a writer. Worse yet, anything you’ve accomplished up to that point will be re-examined, criticized in the harshest terms, and vilified undeservedly. Each piece you write must be better than the last. You must continue to grow in the craft and become a better writer to keep your audience.

Rule 8. Realize that being a writer is a job with more than creative needs. You are in the business of being a writer. Learn about that business: its benefits, its pitfalls, its complexity. Contracts, deadlines, taxes, expenses… there is more to being a writer than writing. If this disturbs you, consider another career.

Rule 9. Be prepared to personally connect with your audience. Being a writer doesn’t mean you can completely cut yourself off from society to create. Learn to combine your interaction with the public and your research. People want to know about you; why you write what you write. More than that, they want you to know about them. Writers are a peculiar breed and the public wants to participate in your art. They want to be part of it but aren’t sure how. Take them in and let them be a part of your work by connecting, talking, sharing. Be personable.

Rule 10. Finally, don’t quit your day job. Very few writers make enough money to support themselves. Even for the lucky few who manage to make a living, it’s an uncertain and unsteady income. Until you get that six-figure check from the major publishing house, best make sure there’s enough coming in to put food on the table and clothes on your back. It’s a tough world out there and no better for the creative types. 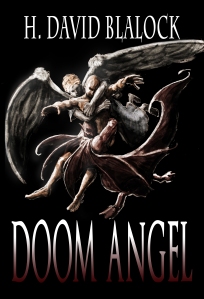 About H. David Blalock:  Born in San Antonio, Texas, David spent the majority of his formative years in Jacksonville, Florida. At the age of 16, his family moved to the Panama Canal Zone where David finished school and entered employment with the Department of Defense as a Powerhouse Electrician.

Hiring into the FAA, he returned with his wife and two daughters to the States and settled briefly in Gulfport, MS. A few years later, he moved to Memphis, TN, as an Air Traffic Controller for the Memphis ARTCC. There he remained until his retirement.

David’s writing has appeared in numerous anthologies, magazines, webzines, and writer’s sites. His work continues to appear on a regular basis through multiple publishing houses.

H, David Blalock’s Angelkiller Book Synopsis: Why do bad things happen to good people? Simple. In the ancient war between the Angels of Light and Darkness, the Dark won. Now it is the job of an undercover force simply known as The Army to rectify that.

Using every tool available, The Army has worked to liberate our world from The Enemy for thousands of years, slowly and painfully lifting Mankind out of the dark. On the front of the great Conflict are the Angelkillers, veterans of the fight with centuries of experience.

Jonah Mason is an Angelkiller, and his cell is targeted as part of plot to unseat a very powerful Minion of The Enemy. Mason and his troop are drawn into a battle that stretches from real-time to virtual reality and back. The Conflict is about to expand into cyberspace, and if Mason is unable to stop it, The Enemy will have gained dominion over yet another real