I first heard of Imaginarium when I met Stephen Zimmer at MidSouth Con. The excitement he shared for the event was contagious and I wanted to be involved. 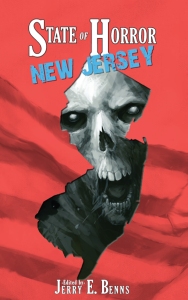 Quick description of it:

State of Horror Anthologies are a series of books which feature stories based in and capturing the feel of the state in which it is names. Both anthologies feature 13 tales of horror.. These are the first two of 50 books planned for the series.

Something unique about it:

State of Horror anthology series was originally created by author Armand Rosamilia and was relaunched after acquisition by Charon Coin Press. Each of the nine previously books will be updated and new stories added. This relaunch is flagship anthology for Charon Coin Press.

Links for people to buy it:

Jerry Benns started writing when he was quite young. However, he began seriously writing in 2010 by launching his blog, TripThroughMyMind.com. Since then, he has expanded the site to include interviews with authors, book reviews, and sections to encourage building the writing community. Jerry’s deep-seeded enjoyment of reading and writing now has him embarking on the exciting journey of publishing by launching Charon Coin Press.

In 2014, after becoming the editor for the State of Horror anthology series, Jerry pursued the opportunity to purchase the series, and others, in order to release them under his new publishing company, Charon Coin Press. Jerry brings his experience from his previous marketing/branding company, as well 15 years of experience as a networker and project manager to Charon Coin Press.

Jerry continues to write short stories for a collection to be released later in 2014. He is also currently working on the first novel in his urban fantasy fiction series to be released in 2015.