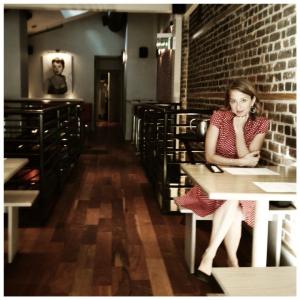 People often look at me funny when they find out I write horror, and I get it. Really, I do. I look pretty sweet and innocent with blonde curls and blue eyes. I can usually be found wearing either girlie dresses or running clothes, and my black lipstick and nail polish only get worn on Halloween.

I definitely don’t look like a horror writer. In fact, I look more like the first-to-die in a 70s slasher flick.

But I’ll tell you a little secret. I write horror and dark fiction for one reason and one reason alone: I’m always afraid. Always. I never live a day without fear.

I guess you could say it started when I was very small, the year Gremlins came out. I was five, and I fell in love with Gizmo, the brown-and-white, fluffy mogwai. I watched the movie again and again on our brand-new VHS, and begged my parents for a stuffed Gizmo doll that made little jingle sounds when you shook him. I LOOOOVED him so much, I brought him to kindergarten show and tell…TWICE.

But at night, after the lights went out….that’s when I was afraid of the gremlins! I’d sit up in bed, wide-awake, clutching Gizmo with sweaty palms, waiting for the green goblins to come and eat us both. I’d picture their long, clawed fingers slithering around and under the bedroom door.

A few years later it was Freddy Kruger and the ghosts of Poltergeist that got under my skin, setting the stage for a lifetime of fear-induced insomnia. After that came The Silence of the Lambs and Buffalo Bill’s kidnapping of the mayor’s daughter in that windowless white van. I’d stare at strangers everywhere, suspicious that they’d want to snatch me up and throw me in the pit with the puppy and the lotion.  When a little boy was kidnapped and murdered in my hometown the year I turned twelve…well, let’s just say I didn’t sleep for months.

Nowadays my fears take a much different shape. I’m not afraid for myself anymore. Not really. Now I fear for my child. She’s six, and spunky and sweet, and I’m terrified that one day someone’s going to try to snatch her from me. I’m terrified that she’s going to get hurt. I’m terrified I’ll have to die to defend her, because I’d take a bullet in a heartbeat if it meant she’d get to live a full and happy life.

So yeah. Always afraid of something. That’s me.

So it’s no surprise that whenever I sit down to write, dark stuff comes out. In my first books, it was zombies, because who’s NOT afraid of creatures that used to be like you and me, but are now mindless, insatiable beasts? With my new book, JO (out September 1st), you see a lot of my childhood fears coming to life.  You see a kidnapping. A mutilation. An ominous, windowless van. Monsters, coming to life.

It’s there. All of it. The only thing missing is ghosts, but I’m leaving them for a later story.

But now you know it. If you want to write horror, you can start by being afraid. All the time. Once you are, the stories will practically write themselves. 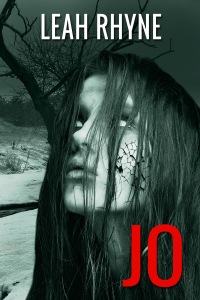 Jolene Hall is dead – sort of. She can walk, think and talk, but her heart doesn’t beat and her lungs stopped breathing ages ago. Her body’s a mosaic of jagged wounds and stapled flesh.

Jolene Hall has a choice: turn herself in to the authorities, led by a suspiciously handsome police officer, or team up with her roommate Lucy and her boyfriend Eli to find a way to save herself. To Jo, the choice is clear. She’d like to know who turned her into a monster, and she’d like to live to see another sunrise.

But that choice has drastic repercussions.

On a trip deep into the snowy White Mountains, to a hidden laboratory filled with danger and cadavers, Jo and Lucy find more reanimated girls. Part body, part machine, run by batteries and electricity, these girls are killers, created by a shadowy Order with a penchant for chaos…and murder.

To make matters worse, a photo on a wall of victims reveals Lucy is next in line to be “recruited” into this army of beautiful, walking corpses.

When Jo’s physical condition takes a turn for the irreparable, and the Order kidnaps those she loves most, she must sacrifice herself to save them all.

Leah Rhyne is a Jersey girl who’s lived in the South so long she’s lost her accent…but never her attitude. After spending most of her childhood watching movies like Star Wars, Alien(s), and A Nightmare On Elm Street, and reading books like Stephen King’s The Shining or It, Leah now writes tales of horror and science fiction.  Her first novel, Undead America Volume 1: Zombie Days, Campfire Nights, released in the fall of 2012, and it’s sequel, No Angels, released in the fall of 2013. The final book in the trilogy is coming in 2014. She writes for LitReactor.com, The Charleston City Paper, and for herself at www.leahrhyne.com. Leah lives with her husband, daughter, and a small menagerie of pets. In her barely-there spare time, she loves running and yoga.