“Hello, My name is Inigo Montoya. You killed my father, prepare to die.”

Oh hello. I’m Kerstin Palmer. (Don’t worry. I swear those of you reading this are not going to die. Yet. I am a grim reaper after all so collecting souls is my job.)

Sorry, I got swept up in the drama of The Princess Bride. It’s one of my favorite movies. I know. It’s a guilty pleasure, but even a grim reaper has to have them. Besides reading, I do get some time to watch a movie now and them. I mean I haven’t been dead that long that I don’t enjoy a good flick. Believe me, it wasn’t my idea of dying and then being resurrected, again, as a grim reaper. I was happy being a psychic and doing readings out of my house and the occasional house clearance. When I was human, I had come across a few dark spirits and there were a couple of incidents with a demon. But we’re not going to talk about that. I dealt with enough with demons in my past, and well now, even they fear death.

So yes, I hijacked the computer away from Crymsyn. She’s a little bogged down at the moment editing something to do with space yetis from what I can understand. I can’t say that I’ve come across such creatures before, but there are many dimensions, universes, and worlds that I have not gotten a chance to visit yet. It’s nice to see the world this way and other versions of it as well. Most people thing reapers are evil, but we aren’t. We only facilitate the natural order of things. We are not minions of the devil people. So we dress in black and look like skeletons, but that is only to some people. Underneath the black robe, we are people too, or were. We carry scythes because on occasion there are beings and entities we come across that challenge us and we do have to protect ourselves. But we’re not slashing souls or people into shreds. We don’t like to bring violence. At heart we are neutral, neither good nor evil. We walk souls to their destination and once they pass through into their destination, then they go to wherever it is they are supposed to go. I don’t make the decision if they go to heaven or hell.

Sometimes, the archetypes that society has lumped us into they really get to me. You don’t know how hard it is sometimes to break out of the stereotype and show people that we are really angels underneath all the robes. Some of my comrades were created just for the purpose of collecting souls. And others, are people who were elevated into the position because there is always going to be death.

Me, well I’m a little unique. If you’ve read my story in Death’s Dance then you’ll know all about that. So I won’t bore you about that.  Time to get off my soapbox and back to my movie. I only have a little bit more time before my list fills up again and then I’m collecting souls. But, I’m not coming after you.

At least not yet. 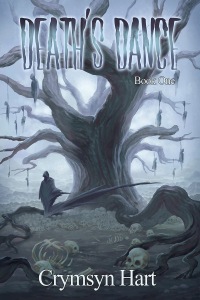 Being a psychic, you would think talking to the dead was a walk in the park. However, it’s not always that simple. The hooded specter haunting me is one I’ve been dreaming about since I was a kid. One day, he appeared in my bedroom mirror. Good. Evil. I don’t know what his true intentions are.

Enter Jackson, ghost hunting show host extraordinaire, and my ex, to save me from the big bad ghost.

From there…well…it’s been a world wind of complications. My house burnt down. I’m being stalked by an ancient evil and gotten myself back into the world of being a ghost hunting psychic. Jackson dragged me, along with a few other psychics, to a ghost town wiped off the map called Death’s Dance.

From there things went from bad to worse.

Crymsyn is a National Bestselling author of over seventy paranormal romance and horror novels. Her experiences as a psychic have given her a lot of material to use in her books. She currently resides in Charlotte, NC with her hubby and her three dogs. If she’s not writing, she’s curled up with the dogs watching a good horror movie or off with friends.

To find out more about Crymsyn: