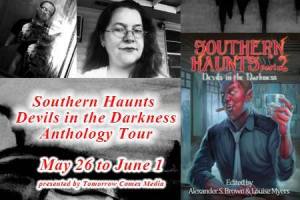 My story, Attachment, in Southern Haunts 2: Devils in the Darkness was inspired by multiple subjects.  For the lead character Tina, I had, at the time of writing this story, befriended a few people who were sensitive to spirits.  While speaking to these individuals, I discovered, in most cases, they would receive visions in the form of flashes or symbols.  They noted on a rare occasion, they could actually see a scene from the past play before them, like it was a movie.

The two innkeepers in Attachment, have names where if they are combined, the name would be similar to the actual possessed establishment which I wrote about.  The location name in my story was changed to protect the property.

With characters aside, I decided to place my story in December as that month brings many joyous gatherings for numerous religions.  It is also a time where many folklorist tales can cause chills to ravish a person.

Predating Christianity, the month of December is one filled with many superstitions regarding demons.  Even in the middle ages, folklore was popular that St. Nicholas would ride a white horse giving presents to those children who were nice.  During this same time, folklore stated that St. Nicholas would be accompanied with demons.  For the children who were naughty, they had to suffer at the hands of the demons to atone for their misbehaving.  Since Attachment, is a demonic story, December felt suitable for its setting.

The houses featured in Attachment, are actual houses and the history of the homes that the reader learns about is true.  The homes that I wrote about were used as grounds for satanic sacrifice.  Psychics have investigated the property and said that not only are the houses and land possessed, but the entire street is possessed.  I had learned about this location when I participated in a ghost tour and the stories shared that cold night were tales that frightened me for many evenings to come.

The subject matter of the story regards the fact that if a person explores a possessed area, they have the chance of being possessed by the demon or demons of that location.  Signs of possession might not become noticeable until that person has returned home, making the demonic entity no different than a parasite.

From the fiery abyss of the underworld comes 20 hellish tales from the south and southwest. Within these charred pages are stories that will introduce you to the many demons that stay hidden but are always nearby…

Dare to meet Deidless, a demon who is a buyer of souls. Discover what kind of demons men can summon. Read of battles between good and evil. Learn of ancient artifacts and stones that crave sacrifice. Finally, become acquainted with legions of evil.

Again, we invite you, sit back, dim the lights, and prepare yourself to meet the devils in the darkness.