I’m proud to announce I’ve signed a book deal with AK Waters Productions for 2014, and it is an impressive one. Not only will I be writing novellas in the zombie, thriller, military and horror genres, but combining two or more genres with each subsequent release. 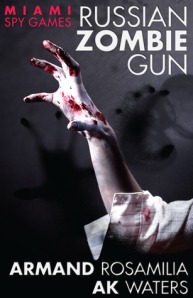 AK Waters was part of the team that first brought you Miami Spy Games, which I wrote, and was released in December 2012. Combining AK’s extensive military knowledge (much of it first-hand) as well as his movie and television connections with my writing skills, the new venture will blossom into a long and prosperous union as I work for them.

The vision of this new company is to create fiction ready to be pitched to major motion picture companies as well as television studios, and seamlessly move from the print page to the big screen. I am quite proud to have signed this contract and working closely with Mr. Waters to ensure each release is well-written and fun. This is what AK Waters Productions has termed ‘militainment’.

The Big Show is the premier football event of the year, and one the Russians feel would be the perfect place to begin their attacks.

Two former friends, now rivals, pitted against one another on the playing field, are forced to fight the madness when the SVR’s plans are unleashed… and a zombie horde takes over the stadium!

Get your eBook copy for only $2.99! Zombie Football