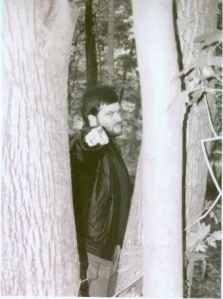 I’ve been asked more than once why I made Gorias La Gaul (the flawed hero of BLOOD & STEEL, OVERKILL and THRALL) 700 years old. Seeing as these yarns are set in an antediluvian age where most everyone lives to be near to 900, I wanted a guy that’d lived a long time, lots of trail dust and even more than sixty years could provide. True, he’s seen and done a lot in his aging body, and frankly, this would provide an endless amount of back-story. No, I didn’t vomit this saga out in one volume but don’t intend to write a series where each one is so interlocked a casual reader can’t grab one and enjoy the stand-alone tale.

I also made him older as I wanted limits on his ability. Gorias can actually get tired, and thus it tested my creativity to get him out of a situation. In THRALL he battles a man of superior ability at a slave caravan. He must use his guile to defeat him, not just his badass strength.

Another reader asked if I created Gorias older as I’m not in my twenties any more. Frankly, I haven’t written for my own age group ever. There may be a few legs on that theory as one’s mortality can bring about fears, perhaps small, but they manifest in strange ways. Giving my main character the usual aches and pains of life makes for a real read, I wager. I oft say, “I’m not over the hill, but I can see the base coming up fast.” Plus, I don’t really have any aches & pains regular, yet.

Let’s face it: Most fantasy stories are set in pretty hard to swallow realms anyway. I set mine, usually, in a lost sliver of our own Earth’s history, thus, the sky is blue, the seasons roll and there’s one sun in the sky. However, among the dragons, odd creatures and weird magicks I try to make the characters as real as possible, Gorias is older, not a real paladin by any means, and he runs into bad seeds. Having a series of characters motivated by petty greed, or blemishes in their character makes for interesting tales, I think. Not every bad character is really bad, certainly not in their own opinion.

Nosmada, the dark lord in THRALL isn’t evil in his mind and just trying too appeasing his God’s wrath albeit in a bizarre way. The motivations of Queen Garnet in OVERKILL seem starchy and elitist, yet Gorias goes along for the ride. The diverse groups he meets, the religious maniacs or pirates, military men and warriors, all have their own agenda. If Gorias were a teen on his first adventure, I doubt he’d have made it through the opening chapters with any realism attached. Plus, his long history makes him a target. Many want to kill Gorias to be a part of his legend, a portion of that bar song, like he relates, “The part where I get killed.”

700 years of life won’t give a character a TWILIGHT glittery glow, but the rough surface left by such time is a canvas I chose to paint on, usually with material drawn from the hearts of fallen foes. In BLOOD & STEEL, we see Gorias as a child and see events that may have formed his persona.

Was Gorias the end result of a drunken BS session on mythology with my brother Mark? That may be true, too. Is he the culmination of alotta reading and wild thoughts? Yes, I suppose. Would the casual reader be entertained by such character driven fiction? Sure, and get lots fo laughs & prolly grossed out, too.

I gotta go before I keep talking to myself more. 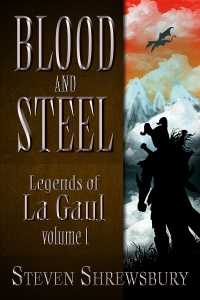